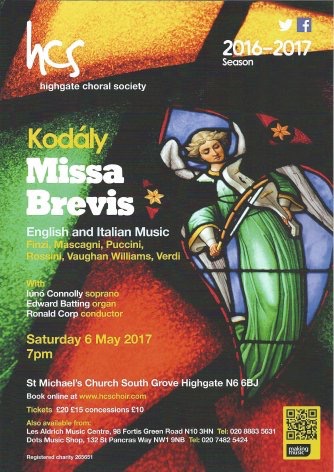 The next concert of Highgate Choral Society on Saturday, 6 May 2017 has a mixed programme. The first part of the concert features English and Italian music. We will sing music by Finzi, Mascagni, Puccini, Rossini, Vaughan Williams and Verdi. After the interval we will perform Kodály’s Missa brevis in a version for chorus and organ to mark the 50th anniversary of Kodály’s death. The concert will take place at St. Michael’s Church, South Grove, Highgate N6 6BJ and starts at 7 pm.

1. Zoltán Kodály (1882 – 1967) was born in Kecskemét, a city in the centre of Hungary. In 1900 he went to university in Budapest and studied Hungarian and German language and literature. In the same year he took the entry exam at the Royal Academy of Music in Budapest and studied composition. Kodály met Béla Bartók at the Royal Academy of Music. Both became lifelong friends. After they finished university they travelled through Hungary and Romania with phonograph cylinders to collect folk music and folk songs in remote villages. Folk music and folk songs were of great influence for Kodály and his music. He was also very interested in musical education and developed his own method of teaching music to children. In this method, singing had a special role and also choral music was for Kodaly one of the most potent mediums, because he saw it rooted in the Hungarian musical and social tradition.

2. Zoltán Kodály wrote his Missa Brevis in dark times. Hungary joined the Triparte Pact between Germany, Japan and Italy in 1940 and fought as member of the Axis powers in Yugoslavia and Russia. In August 1943 Hungary decided to contact the US and their allies to start negotiations of a secret peace treaty. When Germany discovered this “betrayal” of Hungary, they made plans to occupy it. From March 1944 onwards Hungary was occupied by German troops and ruled by a government which was aided by a National Socialist military governor. In October 1944 the Red Army started its offensive against Budapest. The Russians were able to take Pest in December 1944, but besieged Buda for seven weeks until the city’s unconditional surrender on 13 February 1945. Kodály stayed in Hungary during the Second World War. The situation in the city was dire. Many civilians died during the siege, either from bombing and military action or from starvation and diseases. The houses were not safe anymore and many took refuge in cellars and air shelters. Zoltán Kodály and his wife first lived in a cellar of a Benedictine convent school, later they moved to the basement of Royal Opera House in Budapest.

Kodály started working on his Missa Brevis when he was in hiding in the cellar of the convent. In 1942 he had written an organ mass which was first performed in St. Stephen’s Basilica. While he was in the cellar of the convent he started reworking his mass into a choral work with organ. For Kodály the words of the mass were always of particular poetic significance and I think it is not surprising that he turned to them in such terrible times. The Missa Brevis was performed the first time early in 1945 in the cloakroom of the opera house which was used as improvised concert room, because the main opera house had been damaged by bombs. Kodály gave the mass the subtitle “in tempore belli” (“in times of war”). He made later another version of the Missa Brevis for chorus and orchestra. The first British performance of the Missa Brevis was a broadcast by the Belfast Co-operative Choir in October 1945. A further performance took place during the Three Choir Festival in Worcester in 1948 (conducted by the composer) and was repeated two years later at the Gloucester Festival.

3. The Missa Brevis is a setting of the Latin text of the mass with its five traditional parts (Kyrie, Gloria, Credo, Sanctus / Benedictus and Agnus Dei). In addition Kodály started with a short Introitus for organ solo and ended the mass with an Ite, missa est which was in original version again for organ solo. He later also prepared a version for chorus and organ. We will use in the concert the original version.

The Kyrie consists traditionally of three parts (Kyrie eleison, Christe eleison, Kyrie eleison). It is the plea to God for mercy. The first Kyrie eleison in Kodály’s setting is austere and kept in the dark colours of the alto section and the bass section which sing a short melodic phrase in canon. The Christe eleison is brighter and is dominated by the higher voices. The soprano section is split in three parts which sing haughtingly beautiful chords juxtaposed with the three lower voices. In the second part of the Christe eleison the altos join the sopranos. For the second Kyrie eleison Kodály uses the same melodic phrase as for the first Kyrie for the altos and basses. This time they are joined by the sopranos and tenors who sing three long cries on eleison (“have mercy”).

The Gloria is a celebratory part of mass which praises, lauds and glorifies God. In the Missa Brevis the Gloria consists of three parts. The first part is filled with military fanfares. It is a fast section (Allegro) with many runs and raising lines for all voice parts. The second part is much slower (Adagio). It is again dominated by the lower voice parts. The altos start to sing “qui tollis peccata mundi, miserere nobis” (“that taketh away the sins of the world, have mercy”). The basses then join the altos with the same melodic line. Toward the end of this part, the tenors repeat “have mercy” several times. For the final part of the Gloria Kodály returns to the fast tempo of the first section and the military fanfares. The Gloria culminates in a glorious Amen which is once repeated.

The Credo sets the creed (Nicene Creed) to music, the summary of the Christian belief. The setting in the Missa Brevis is more episodic. It starts with the altos and basses in unison in a quiet march. The second part is slower and very quiet when the choir sings “et incarnatus est”. The music depicts  the mystery of the incarnation. The cruxificus starts with the three upper voices singing forte (loud) with great anguish. As this part progresses the music gets quieter and quieter and dies away. The “et sepultus est” (“and was buried”) is as quiet as possible, almost inaudible. For the joy of the resurrection Kodály chose a fast tempo and ascending choral lines which mirror the text. The choir starts soft and finishes this section in a fortissimo (very loud). The next section “et in spiritum sanctum” starts with the basses, soon the other voice parts join and sing in unison “qui cum patre et filio”. Also this part of the mass ends with a confident Amen.

The Agnus Dei consists, as the Kyrie, traditionally of three sections. The text “Lamb of God who takes away the sins of the world” is repeated three times. The first two times the sentence finishes with the plea “have mercy on us”. The third time it ends with “give us peace” (Dona nobis pacem). The Agnus Dei in the Missa Brevis recalls themes from the Gloria and the Kyrie. In particular by taking up motives of the Kyrie the music comes full circle and gives the piece unity. The movement builds towards a climax with the anguished “Dona nobis pacem” (grant us peace). Kodály uses for this last cry for peace the motives from his Christe eleison setting. The sopranos are again split in three parts soon the altos join. A few bars later also the tenors and basses join this plea for peace. Given the circumstances of the composition of the mass, it is not surprising that these words receive the longest treatment of any words of the Missa Brevis. The Agnus Dei is almost as long as the Credo which has far more words to set and the word “pacem” (peace) at the end is repeated over and over again.

One thought on “Kodály: Missa Brevis – a mass “in tempore belli””

This site uses Akismet to reduce spam. Learn how your comment data is processed.